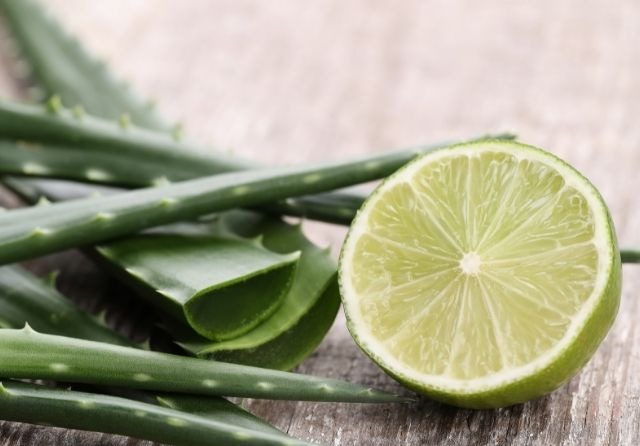 Psoriasis is an inflammatory skin disease that mainly affects the skin of up to 8% of the world's population. Do you know how aloe vera helps you reduce and keep your symptoms under control? Aloe vera use for psoriasis is an extremely beneficial natural treatment for its anti-inflammatory and skin regenerating properties. It helps to relieve some of the most frustrating symptoms of psoriasis, such as maculopapular plaques (plaques covered by flaky skin).

Psoriasis derives from the Greek, “iasis” (state) and “psora”, which means itch. It is characterised by the presence of chronic or recurrent papules (a kind of pus or serosity-free “pimple”) or erythematous plaques (raised reddish surface of the skin). They most often appear on areas such as elbows, knees, scalp, outside of the arms, front of the legs and even on nails.

The cause is unknown. There are a number of determinants including genetic, immunological and neuromodulatory mechanisms. There is an alteration:

• In the cells of the corneal layer of the skin (keratinocytes).

• Of the immune system.

• Of neurological regulatory factors with respect to skin dendritic cells.

Furthermore, genetics play a significant role, with a family incidence of 30%. This does not mean that you will develop this disorder if you have a close relative with it. However, it has been found that when the other two factors are added, there is a greater likelihood of it being triggered.

The most noticeable symptom is an accelerated proliferation of epithelial cells. Dry, thick, raised plaques on the skin are the most common sign of psoriasis. These plaques are often covered with a silvery-white scale and are itchy. Although they are usually common, symptoms may vary depending on:

• Type of psoriasis you have.

• Areas of the body affected by psoriasis (scalp, nails, legs and arms).

• How much of your body is covered by psoriasis.

However, treatment and care with aloe vera for psoriasis of the hair, nails and skin in general, can help you control and alleviate this annoying and unsightly disease.

Psoriasis on the scalp

When mild, there may only be light, fine scaling, but symptoms in moderate-severe scalp psoriasis include:

In actual fact, this problem itself does not cause hair loss, but scratching too much or too hard or touching the scaly areas, on top of the stress of having this condition, can lead to temporary hair loss. Fortunately, it grows back when your skin clears up.

This is how aloe vera helps with scalp psoriasis, reducing inflammation, flaking and slowing down the degeneration of your skin cells.

How to use pure aloe vera for psoriasis?

Although there is no cure for psoriasis, using aloe vera for psoriasis helps to alleviate its symptoms and keep them under control. This is due to its composition, which gives it its anti-inflammatory, moisturising and skin soothing properties, while helping to regulate the immune system (El-Gammal, A. et al., Research Trusted Source, 2018).

Aloe vera is a succulent plant that you will have definitely seen before. The fleshy pulp of its leaves is a semitransparent gel that can be applied in a number of ways Let’s look at a few of them.

• In mild to moderate psoriasis, the cited research observed an improvement in symptoms after applying 3% pure aloe vera combined with 50% propolis over 12 weeks.

• Another formulation with pure aloe vera for psoriasis is as follows: 9 tablespoons of pure aloe gel, 3 tablespoons of vegetable oil (yoyoba, moringa, olive, almond, wheat germ, coconut or a combination of these, depending on skin type), 5 - 10 drops of geranium essence as a pH skin normaliser and roughly 10 drops of natural preservative (grapefruit seed extract or lemon essence). Mix everything by beating vigorously until the cream to be applied is formed.

Benefits of aloe vera for psoriasis

Although there is still a lot of research to be conducted, studies over the past two decades indicate that aloe vera is good for psoriasis. Its main benefits are:

• Speeds up the healing of wounds. Helps healing of plaques that crack and bleed. This is thanks to glucomannan, a compound that influences the growth of epithelial cells. (Abbas Hashemi, S. et al., 2015).

• Reduces inflammation. It is one of the best known properties of traditional phytotherapeutic medicines. Furthermore, research has been conducted into other inflammatory diseases that support the therapeutic properties of aloe vera (Reuter, J. et al., 2008).

• Hydrates and moistens skin. This ability is used in traditional phytotherapy, where it has long been used to soothe burns. Helps prevent the appearance of cracks and reduces the scaly appearance of the skin.

To sum up, the benefits of aloe vera treatment for psoriasis are mainly related to its anti-inflammatory, soothing, healing and moisturising properties. The aloe vera gel must be high-quality and pure.

It will help you naturally alleviate your symptoms and keep them under control. What’s more, the improvement in your health and appearance will also boost your self-esteem, which will help lower stress levels and boost your defences, which, if you remember, is an important factor in the development of this autoimmune disease.

At Finca Canarias, we have products meticulously elaborated with pure aloe vera gel. Check out our website, read about the benefits of aloe vera for psoriasis and discover other recipes and treatments. It naturally improves your quality of life!

Ref. 33
€15.00 (tax excl.)
Shampoo composed of 50% fresh Aloe Vera juice, considered to be the best cell regenerator in nature. Purifies the roots, soothes the scalp, prevents and treats dandruff and adds strength and shine to hair.

Save products on your wishlist to buy them later or share with your friends.