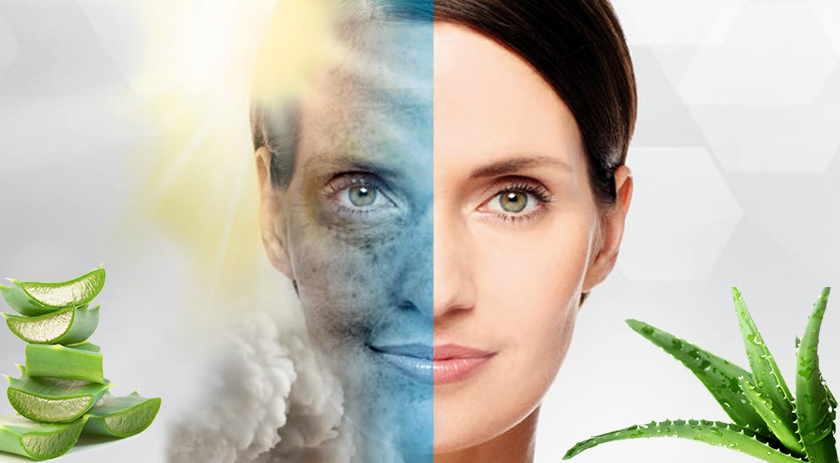 Aloe Vera is a plant increasingly demanded for its properties and nutrients, as well as being a natural barrier of protection for the skin against free radicals and environmental pollution. Aloe Vera helps the outer layer of the skin to protect itself from inclement weather and pollution, a 21st century problem in which cosmetics is increasingly important.

The natural cosmetics is a fundamental piece for the health of the skin, especially taking into account the effects that contamination and pollution of cities produce in our organism. For decades, laboratories have studied the consequences of skin contamination, and it is estimated that in 2050 a 65% of the world population will live in large urban centers.

Even the smallest particles and exposure to pollution continuously can cause long-term skin problems, such as color change, dryness, the feeling of dirt, acne and low perspiration of the pores and even its obstruction.

In time, pollution, smoke, gases, traffic and waste that exist in the air of large cities can affect the dermis causing premature wrinkles, irregularities, imperfections and spots, hypersensitivity, redness and lack of light.

In addition, to take care of the hydration and deep cleansing of the skin daily it is essential to provide the dermis with the necessary nutrients so that it can defend itself from external aggressions and have a healthy barrier that blocks the effects of contamination. Aloe Vera is a millenary plant used for centuries in cosmetics and skin care, not only for its moisturizing and regulatory properties, but also for being a natural remedy to strengthen the immune system and nourish the skin in depth, penetrating up to three layers.

Its regenerative properties help to minimize stains and provide luminosity, while strengthening the outer layer and renewing the cells of the epidermis, cleaning the pores and creating a shield against urban pollution.

The rich composition of pure aloe Vera gel makes this millenary plant a good formula to fight against the toxic substances generated by environmental pollution. Aloe Vera contains antioxidant vitamins A, C and E, as well as minerals such as selenium, manganese, zinc, chromium and germanium, among others. It also involves the supply of essential and secondary amino acids, plant sterols and high water content.

As a natural antioxidant and regenerator, aloe Vera gel strengthens the skin and prevents the effects of exposure to pollution.

Aloe Vera, in addition to providing the necessary nutrients for healthy skin is also a plant with antibacterial and antifungal power, so it prevents possible dermal infections. Acne, redness, and even problems in the eyes or their surroundings like styes are often caused by an infection, so helping the skin to prevent them is a key to not succumb to the side effects of these, annoying, painful and sometimes unsightly and contagious. Aloe Vera prevents to a certain extent the growth of microorganisms and pathogenic bacteria, and is an effective remedy to treat and eliminate many fungal and viral infections, which come largely from pollution and environmental pollution that coexists in large cities.